I bought a Seagate expansion 500gb and everything was working fine until I discovered that it would not eject.

The message kept coming up telling me that it "cant stop my external drive because a program might be still using it, close any programs that might be using the device".  I was unable to safely eject my device and it took another 40 minutes of researching to solve the problem – not exactly what I wanted to do.

The problem was all in the Device Manager and it wasn’t until I double clicked on the drive that this box came up. Ticking the Better Performance box solved the problem. However I still had to shut my computer down, remove the device, then restart the computer. A simple test followed with no problems and I can now remove the expansion file anytime. 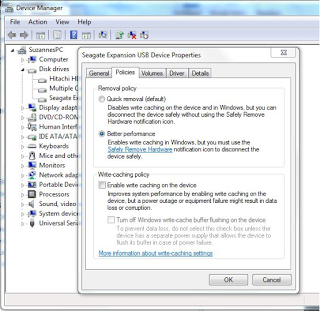